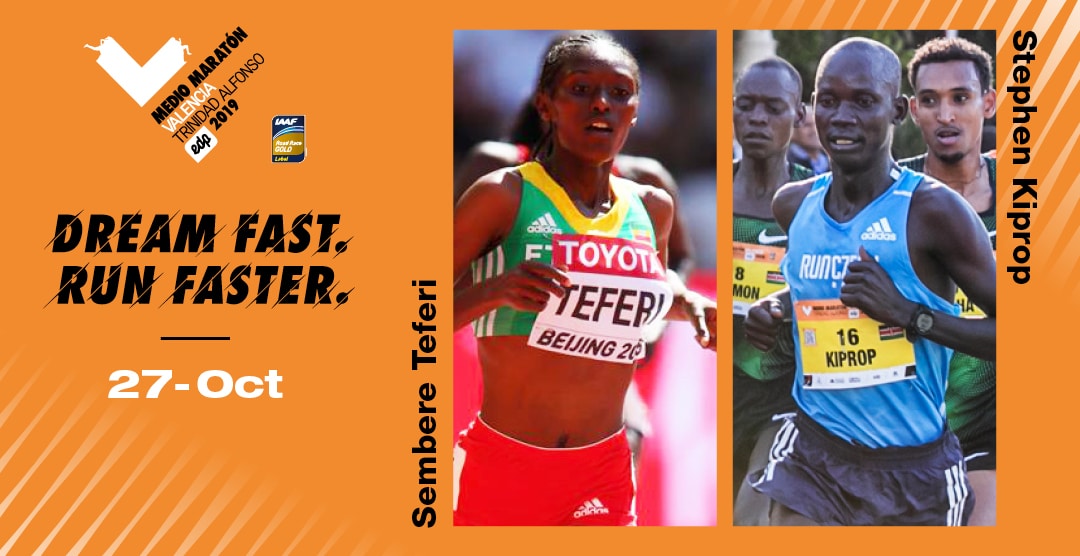 The Valencia-Trinidad Alfonso EDP Half-Marathon, which already holds the Men’s and Women’s world records, wants to keep leading the international pack as the world’s fastest race over this distance. That is why the Organisers are working hard on the selection of the elite athletes who are most likely to set new world records on Valencia’s lightning-fast circuit.

To this end, the Organisers will offer a prize of €70,000, as well as the rewards set out in the Regulations, for those athletes setting new Men’s or Women’s world records, plus a bonus of €30,000 if the winner sets a time of under 58:00 for Men, or under 1 hour 04:30 for Women. Specifically, the Valencia Half-Marathon has signed a contract with Kenyan runner Stephen Kiprop, world leader of half-marathon this year (58:42), Jemal Yimer, holder of national record of Ethiopia (58:33), and with the woman Ethiopian runner Sembere Teferi (1h05:45).

Specifically, the Valencia Half-Marathon has signed a contract with Kenyan runner Stephen Kiprop, holder of the best world half-marathon time this year (58:42), and with the woman Ethiopian runner Sembere Teferi (1 hour 05:45).

Kiprop showed his form in 2018, when he won in three half-marathons in The Netherlands and The Czech Republic, and came fifth in Valencia in 2018 with a time of 59:21; yet it was in 2019 that he leapt to stardom by winning at Ras Al Khaimah with a sizzling time of 58:42, ahead of most international stars over this distance. He is 20 years old and is focusing on beating or approaching the time of 58:18 in Valencia, set by his fellow-countryman Abraham Kiptum, who has been provisionally suspended by the Athletics Integrity Unit. Yimer, who finished second in Valencia 15 seconds above the world record, has already ran the 10,000 meters in 26:54:39, his current personal best.

Marc Roig, selector of the international elite for the Valencia Half-Marathon and Marathon, stated that ““We are going all out for Men’s and Women’s world records, with various candidates for each one. Obviously, we have to be prudent because weather, tactics, and the form of each athlete will decide the results. However, we are working hard to make this an edition of the trial to remember and to put Valencia in the spotlight of the world’s running scene on the 27th of October”.