The Valencia Marathon Trinidad Alfonso EDP is held in Valencia on an ideal circuit (that is to say, one that is completely flat). The temperature is between 12-17 degrees Celsius (54-63 Fahrenheit), making the city great for road races. These features, together with the city’s incomparable race venue — The City of Arts and Sciences — make the Valencia Marathon Trinidad Alfonso EDP one of Spain’s most exciting events.

The 2019 edition broke all the records, with the best time ever on Spanish soil, set by Kinde Atanaw Alayew with 2 hours 03:51. It is Spain’s fastest marathon for both men and women. In the latter category, Roza Dereje shaved three minutes off the women’s record for the trial, setting a time of 2 hours 18:30. This was the first time in history that four women beat 2 hours 19 in the same race. Furthermore, the Valencia Marathon is the fastest in Spain for both Men and Women.

In the national category, four athletes chalked up times that qualify them for the 2020 Olympic Games in Tokyo.

Moreover, the numbers of runners taking part in the race climbs each year. There were 25,000 entries in this year’s edition and over 21,000 crossed the Finishing Line. This makes the trial the one with most Finishers in Spain over this distance.

We look forward to seeing you on the 6th of December 2020.

The Valencia Marathon Trinidad Alfonso EDP was awarded the IAAF’s Road Race Gold Label in 2016, confirming the race as one of the world’s best trials over 42,195 metres. It is the first Spanish marathon to attain this lofty status.

The City of Arts and Sciences will be the nerve centre of a trial that seeks to be a major sports festivity. Both the Start and Finish of the race, and the activities held in parallel with the Marathon will be set in this remarkable architectural enclave that so spectacularly captures the spirit of the 21st Century

Beat your time as you run over the lake boardwalk. Athletes will quite literally reach their goal running over the waters next to the Science Museum. The boardwalk is over 150 metres long, making it one of the most fascinating marathon endings.

Experience the Marathon through our 360° videos

THE HISTORY OF THE VALENCIA MARATHON

The history of the race in the city dates back to the Valencia Amateur Marathon whose first edition was held on the 29th of March 1981. The same format was followed for a further 29 times until the 30th edition held in 2010. This history is closely linked to Sociedad Deportiva Correcaminos [running club], one of the first sports clubs to embrace amateur athletics at the end of the 1970s 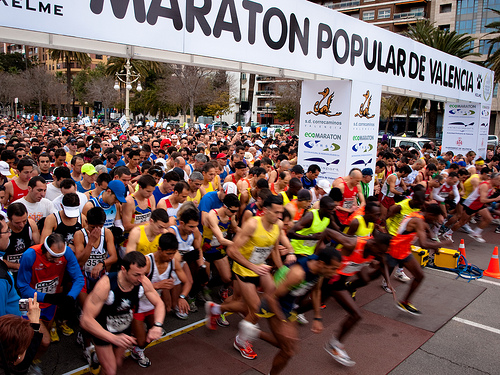 The birth of Valencia’s Marathon happened about the same time and for much the same reasons as elsewhere in the world. Curiously enough, the Valencia Marathon sprang to life on the very same day as the London Marathon: the 29th of March 1981. There were few city marathons before this date and many after, with the number of such events waxing over the years. Over these three decades, the circuits have changed, as have the nationalities of the athletics winning the race.

Valencia’s Paseo de la Alameda (a tree-lined avenue flanking what was formerly the north bank of the River Túria) was the site of the Marathon’s thirtieth edition. The Marathon circuits have changed in the quest for the ‘perfect’ route — a goal that can be interpreted in many ways. Technical improvements have been made along the way and an effort made to give spectators a good view of the runners. The winners have come from many nations but the public’s memory is selective and Vicente Antón and Elisenda Pucurull have stuck in the hearts and minds of amateurs. The 31st edition marked the birth of a new Valencia Marathon. It posed a Hamlet-like dilemma for the organisers — Correcaminos SD (Running Club): namely whether to continue running second-league marathons or to ‘take up arms against a sea of troubles’ and accept Valencia City Council’s offer to partner a top-rate race and attempt to scale the sport’s Olympian heights. We all know that the latter option was taken. Time will tell whether the right decision was taken and we must all pull together in striving to vindicate it.

The Valencia Marathon will celebrate its 40th anniversary in 2020. The occasion is something that we plan to celebrate throughout the year.

The 40th anniversary of the trial falls on the 6th of December 2020, the date chosen for the race. However, we shall also celebrate the anniversary through a host of initiatives before the big day. 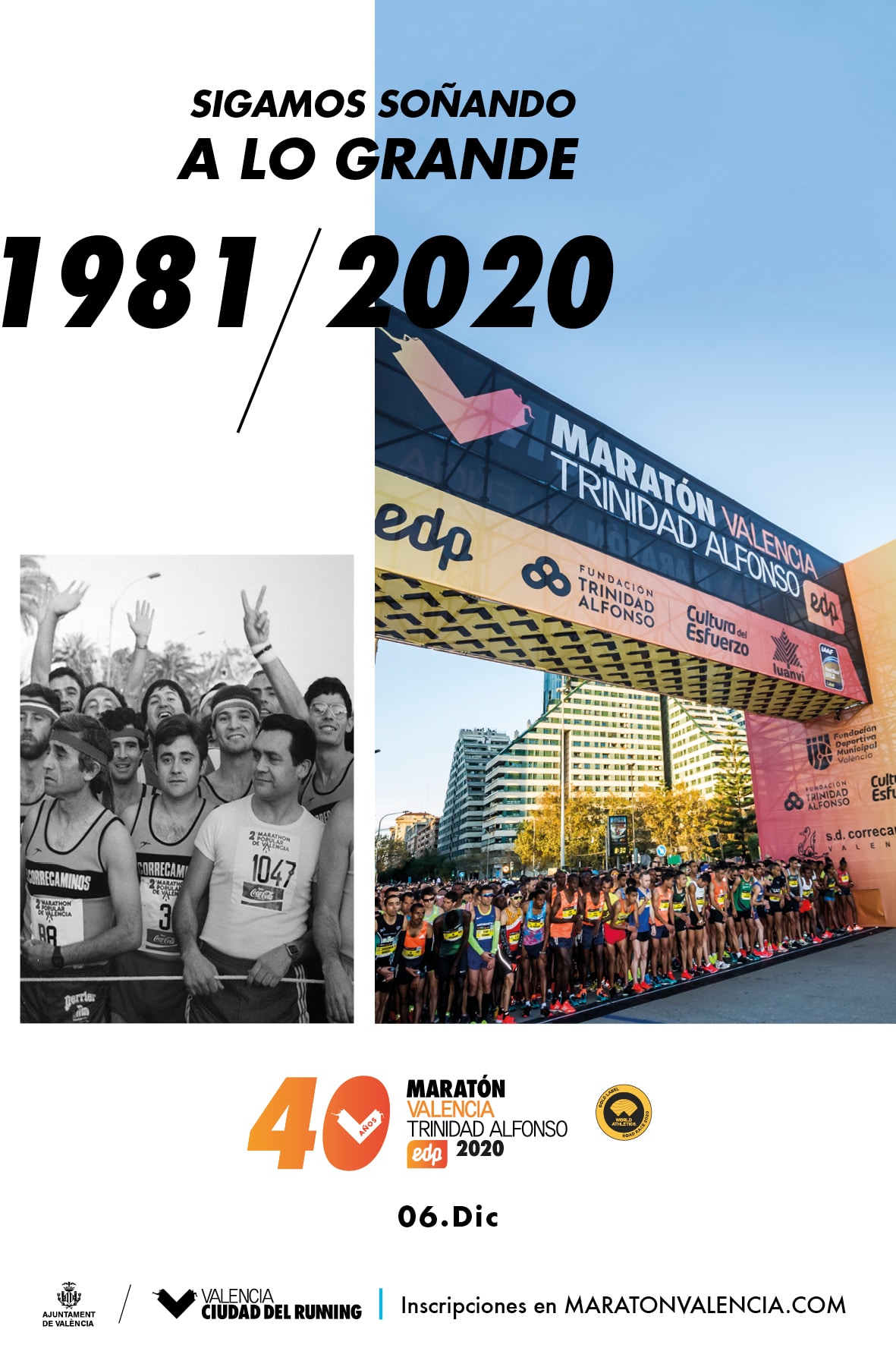