The Valencia-Trinidad Alfonso EDP Marathon, held by SD Correcaminos (running club) and Valencia City Council, has presented its new running shirts for athletes taking part in the 39th edition of the race, which will be held on the 1st of December. The presentation of this year’s shirts also featured the new television spot for Spain’s best marathon. 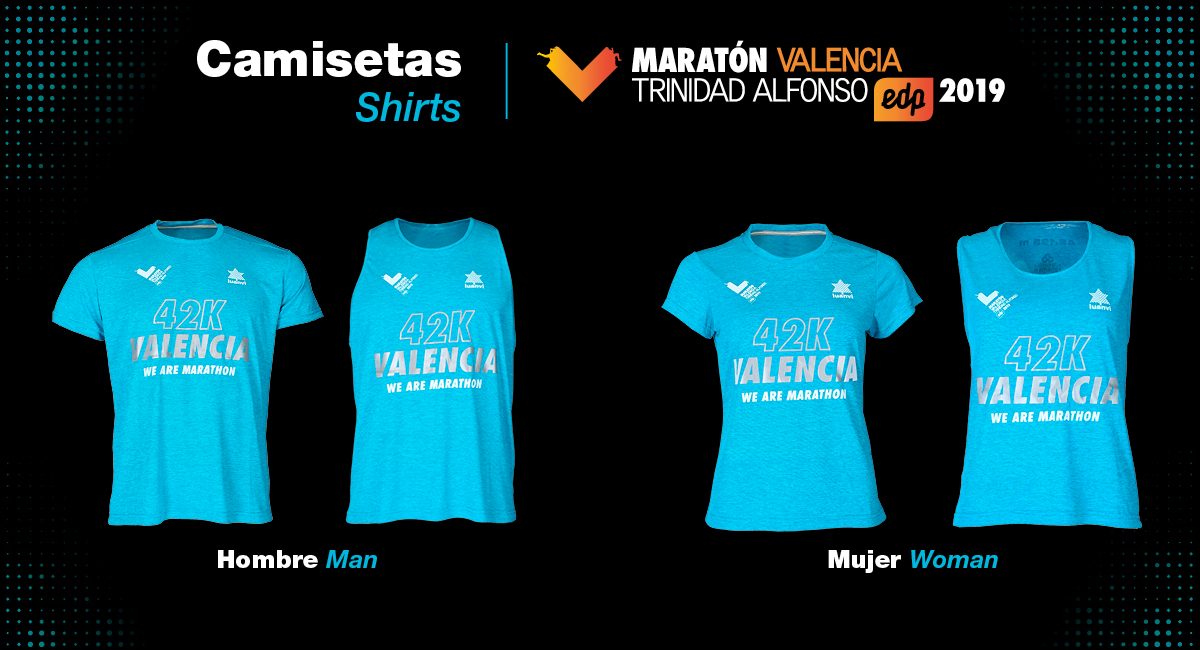 The garments, designed by Luanvi, the trial’s official sports clothes brand, are made from Cool Skin a high-quality, high-tech textile that is a feather-light, purpose-made fabric that keeps runners cool. The main new feature of the shirts this year is that they incorporate a reflective component in the design, on the blue boardwalk motif. This differentiating feature is tightly linked to the TV spot to boost entries among those runners who have still not signed up for the hugely popular race.

Vicente Tarancón, Luanvi’s CEO, also highlighted the incorporation of the innovative reflective fabric, “This year, we have made a big effort in offering all runners the chance to choose which version of the official shirt they want right up to the 30th of June. They can choose between a short-sleeved shirt and one with straps when they sign up for the trial.” Furthermore, all runners who are planning to cross the Finishing Line in ‘Valencia Ciudad de Running’® can get a training shirt.

Paco Borao, President of SD Correcaminos (running club), stressed that the 2019 target is for 25,000 runners to sport the official running shirt. In this context, he stated, “We already have over 12,000 entries, which is about half of the total number of running bibs available. Drawing a  parallel with the marathon, we are now at the toughest point in the course where we have to pull out all the stops to make sure all the bibs for the trial are taken up. Last year was the first time in the race’s history in which we sold every bib and we plan to do so again this year.”

Elena Tejedor, Director of Fundación Trinidad Alfonso (sports foundation), added,“We have already made Valencia into ‘The Running City’ and now we are going to turn it into the first city that talks to runners. For the first time ever, Valencia will be able to communicate as never before. To achieve this, we are going to turn every corner of Valencia into a channel for expression: through buildings, hoardings, walls, and so on.”

‘Valencia speaks to you’

During the presentation, clubs from ‘Valencia Ciudad de Running’®, official sponsors, and other guests saw the brand new TV spot for themselves. The Organisers created the spot to boost entries at this critical point in the run-up to the race.

The spot personifies Valencia as the protagonist, who encourages and challenges runners to choose the city’s marathon as their next target. Runners of different ages and both sexes train in Valencia’s streets while the city speaks to them and shows messages on the walls of buildings, on the tarmac, on hoardings, and even on a giant projection at the city’s futuristic Science Museum in Valencia’s City of Arts and Sciences, which once again will be the spectacular site for the race’s Start and Finish.

The advertising campaign will be broadcast on both national TV and the Valencian Autonomous Community’s regional TV network. There will be international versions in English for broadcast online in Europe, as well as translations in French and Italian. The aim is to win the IAAF’s new Platinum Label for the 2019 Valencia Marathon, further boosting the trial’s international growth.

Enter for the Valencia Marathon 2019 now