Why do women choose Valencia, ‘The Running City’ to race in? 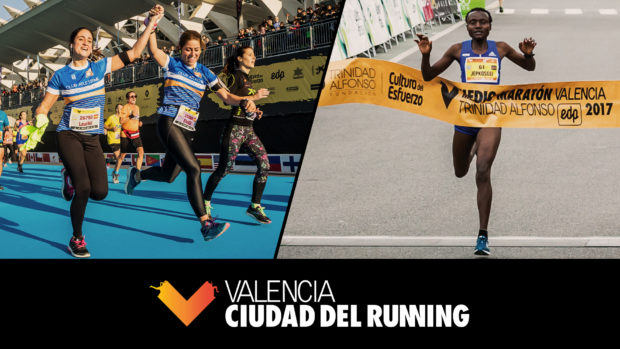 In Spain’s fastest Marathon, the Kenyan athlete, Valary Jemeli Aiyabei, broke the Women’s Record in Spain with a time of 2:24:48 in the 36th edition of the Valencia-Trinidad Alfonso EDP Marathon.

On the 22nd of October 2017, Valencia was thrilled by the incredible performances of two women, Joyciline Jepkosgei and Trihas Gebre, in the Valencia Trinidad Alfonso EDP Half-Marathon. In just one hour, four minutes and fifty-one seconds after the starting pistol for Spain’s best Half-Marathon, the Kenyan runner Joyciline Jepkosgei cruised across the Finishing Line, setting a new Women’s World Record. Minutes later, Trihas Gebre came in second, setting a new Spanish Women’s Record. Gebre did so in just 1:09:57. Two women setting two new records made the crowds go wild in Valencia, ‘The Running City’.

In the 10-kilometre race, Valencia began the year by breaking the Women’s Record in the 10,000 metre Valencia Ibercaja 2018 trial. The victor was Sandra Felis Chebet Tuei, who ran the race in just 30:58. This was the best women’s time ever for the 10-kilometre trial in Spain.

Although they still have a long way to go, more and more women are taking part in the races in Valencia — ‘The Running City’. Since 2012, women’s participation in the Valencia Marathon has risen by 6.4%; by 12.4% in the Valencia Half-Marathon, and by 17.55% in the Valencia Trinidad Alfonso 10-kilometre race. Furthermore, the last of these is the 10,000 metre race that has the highest percentage of women runners — close on 50%.

Valencia helps you reach your goals

The races in Valencia — ‘The Running City’ — are practically on the level, making the city ideal for setting great times and reaching your targets. Moreover, you have the option to compete over any of the distances, ranging from 5 kilometres to the Marathon, following the personalised training plan for the trial you choose. The Circuito Divina Pastora de Carreras Populares [amateur runners’ race track], run by Valencia Council’s Municipal Sports Foundation, saw women’s participation soar by 33%.

You have a long path ahead of you in Valencia — ‘The Running City’. Once you have run the 10-kilometre race, two big trials — the Valencia Half-Marathon and the Valencia Marathon (both the best trials in Spain for their respective distances) still lie ahead of you. Each year, more women take part in the major trials in Valencia. Drink in the awesome, festive atmosphere as the public cheer you on every inch of the way to the Finishing Line and celebrate you hitting another target in ‘The Running City’.

The city that pays homage to women’s sport

Valencia — ‘The Running City’ — fosters women’s participation in its races. The figures speak for themselves: more and more women are running in Valencia. Some trials are only for women, such as the 10KFem ‘Día de la Mujer… Deportista’, the Women’s Race and the UPV Women’s Race. Other movements such as ‘Juntas es Mejor’ [Women are Better Together] actively foster women’s participation in races and in sports in general.

The documentary Mujeres que Corren [Women Who Run] was premiered the day before the 37th edition of the Valencia-Trinidad Alfonso EDP Marathon and has just been screened in the city. The documentary was produced by La Caña Brothers and the protagonist is the journalist and writer Cristina Mitre, who pioneered the women’s running movement that now bears her name. The film covers the origins of women’s sport in Spain from its difficult beginnings to the present day, in which women’s presence is on the up and up.