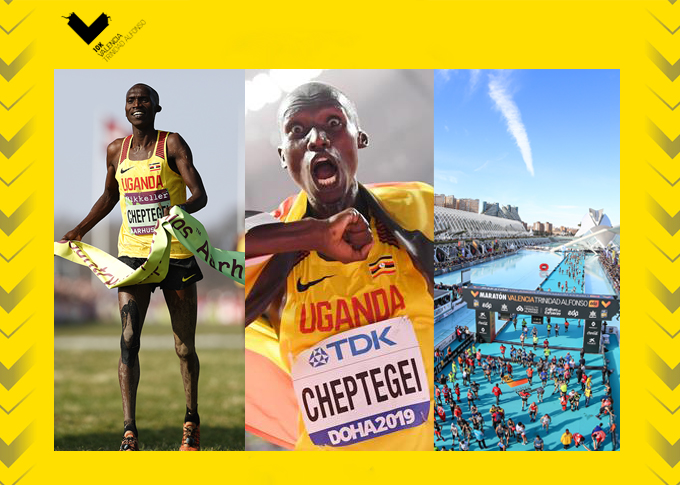 Cheptegei is only 23 years old but he has already proven that he can rise from the ashes of defeat to snatch victory. This year, Joshua Cheptegei was crowned World Cross-Country Champion, and 10,000m World Champion. He is now seeking to add a third triumph by setting a new 10K World Record in the streets of Valencia Ciudad del Running.

During the World Championship in Doha last weekend, the Ugandan athlete thrilled crowds with his sizzling victory in the 10,000m race, which he ran in just 26:48:36, setting the world’s best time this year over the distance. This makes him a worthy successor to Mo Farah. Cheptegei’s victory in Aarhus (Denmark) — where he became the World’s Cross-Country Champion — silenced the criticism of many of his fellow-countrymen. These had slated him two years earlier when he gave out on the last kilometre of the race just when he was on the brink of winning a championship in Kampala, Uganda.

Back then, Cheptegei took the incident in his stride and did not give up, showing the same mettle that makes him such a superb runner. After the humiliating last-minute defeat in Kampala, he worked even harder. The fruits of this labour were not long in coming. He came second after Geoffrey Kamworor (holder of the Marathon World Record) at the TCS World 10-km Race in 2014 in Bangalore; he won Gold in the 10,000m race in the World sub-20 Championship at Eugene; and Silver over the same distance in the London World Championship in 2017.

He used the prize money to fund a 400m gravel track and four streets in the Kapchorwa training camp on the north flank of Mount Elgon, an extinct volcano on the Ugandan-Kenyan border. The €30,000 was money well spent; preventing injuries and helping Cheptegui get even better results from his training. What is more, the training track he funded can be used by anyone.

“I really believe in teamwork because in life you cannot succeed alone,” says the NN Running Team athlete. Cheptegei believes that “you need people to support you and help you in training – running is really about teamwork”. His attitude, leadership, and the help he gives other athletes explain why his companions call him ‘The Chairman’.

In addition to the aforementioned titles, Cheptegei won the 5,000m Diamond League this August, and in November 2018 he ran a 15-km race in just 41:05.

After competing in Qatar, he is putting everything into running the 10K Valencia Trinidad Alfonso. “I have one goal in Valencia, and that is to be the fastest man in history over 10km”, said the Ugandan athlete. This means he will have to beat 26:44, the present world record set by Leonard Komon. Valencia’s circuit makes it the best place to try for a new world record. He could not make a better choice because the Valencians know better than most just what it takes to rise Phoenix-like from the ashes.