The 2018 Valencia Marathon generated over 186,000 overnight stays and tourist spending of €17.7 million in the city

The Valencia-Trinidad Alfonso EDP Marathon is the most important sporting event in Valencia and has a positive impact on the city. This year, the Valencian Institute for Economic Research  (IVIE) has carried out an economic impact study on the previous year’s Valencia Marathon (2018). In that year, the Valencia Marathon set one of the ten fastest times worldwide and beat the Spanish record for both the number of runners entered and those finishing the race. 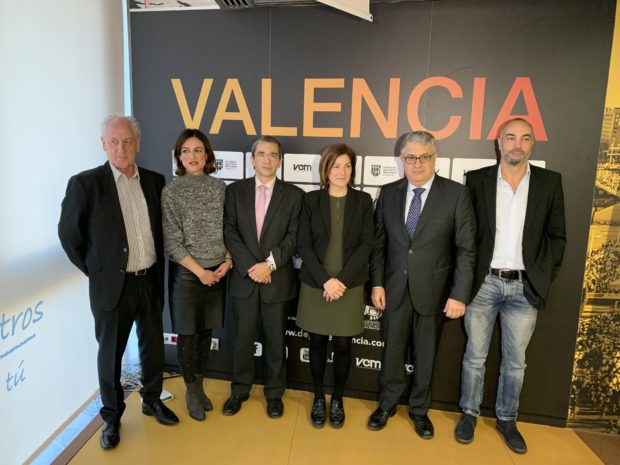 The report on the 2018 edition again revealed very positive figures both regarding the impact on Valencia’s economy and for the feedback from runners on what is Spain’s best marathon. The rigorous IVIE study shows that spending by the organisers (the SD Correcaminos running club and Valencia City Council) came to €4.8 million. The study also found that for every Euro spent on the event, there was a payback of €3.7 in tourist spending arising from the Marathon (that is to say, €17.7 m in all). Most of the tourist spending was on lodging and food. 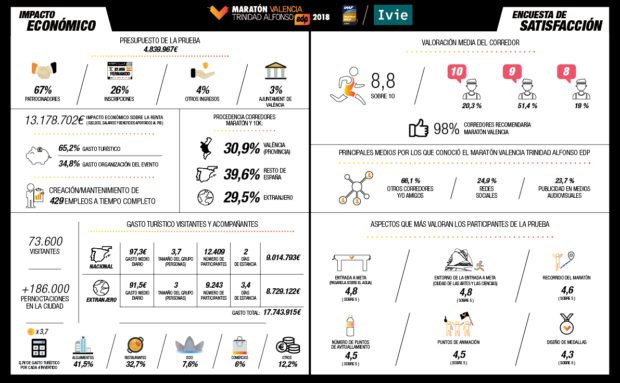 The report, which was drawn up by a team headed by Joaquín Maudos, Deputy Director of IVIE and Full Professor of Universitat de València, revealed that the total economic impact of the Marathon on Valencia’s economy came to €13.2 million in revenue terms (wages and salaries, plus added GDP), and created/maintained the equivalent of a year’s worth of 429 full-time jobs. While the impact on employment was similar to previous Marathon editions, the revenue generated in 2018 rose 3.4% compared with 2017.

Of the total revenue generated in 2018, 65.2% stemmed from participants’ spending and 34.8% from the organisers’ expenditure for this world-class event. These figures reveal both the importance and benefits of the race for the city. Here, one should note that only 3.2% of expenditure came from the public purse. Sponsors’ contributions funded 67% of the costs, runners’ entry fees 26%, and parallel activities a further 4%.

The high percentages of runners from the rest of Spain (that is to say, from outside the Valencia Autonomous Community) (39.6%) and from abroad (29.5%) among those taking part in the Marathon and the accompanying 10-km Race greatly boosted tourist spending. No fewer than 12,409 runners came from the rest of Spain and 9,243 runners from overseas to take part in either the Marathon or the 10-km Race. For runners from the rest of Spain, average group sizes and time spent in the city were 3.7 people and 2 days, respectively. For foreign runners, the corresponding figures were 3 people and 3.4 days. Runners and their companions travelling to Valencia for the event generated 186,105 overnight stays in the city — a rise of 11% over 2017. This was due to the increase in both the numbers of runners and their companions (73,642 compared with 56,470 in 2017, a rise of 30%).

Another report drawn up by Telefónica measuring the mobile phone use found that Spanish runners tended to stay in the City of Arts and Sciences area while foreign runners moved throughout the city centre.

As well as the field work in which 624 questionnaires were administered to runners who had travelled to Valencia to compete in either the Marathon or the 10-km Race, the IVIE research team also analysed the 6,779 satisfaction questionnaires gathered by the organisers from those taking part in the Marathon. The average score given by respondents was 8.8 out of 10, reflecting runners’ great satisfaction with the trial. Here, one should note that no less than 20.3% of respondents gave the top score of 10, while 51.4% gave a score of nine. Of these runners, 98% said they would strongly recommend the Valencia Marathon to others.

Of the services and experience offered to those taking part in the Valencia-Trinidad Alfonso EDP Marathon, runners placed greatest store by: the spectacular Start and Finish over the pond boardwalk; the setting of the trial in Valencia’s City of Arts and Sciences; the new circuit; the host of support points along the route. All these features made the Valencia Marathon a fun event that was highly profitable for the city.

At present, the Valencia Marathon will not be accepting more registrations for the 2021 race
Read news