The Half-Marathon and the Valencia-Trinidad Alfonso EDP Marathon have signed an agreement with KLM Royal Dutch Airlines whereby the company joins the team of sponsors and forges links with thousands of runners and their companions in Valencia ‘The Running City’. 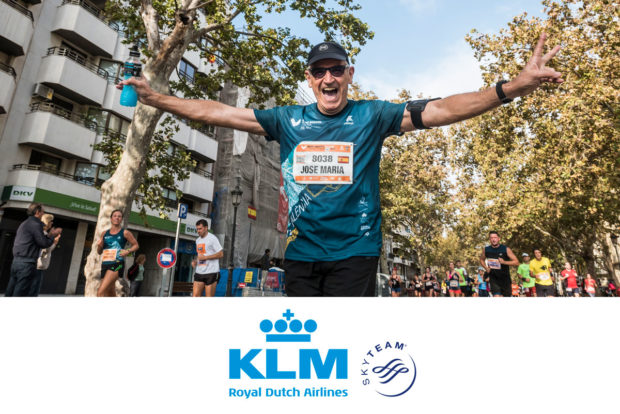 The agreement means runners in both trials will benefit from discounts of up to 15% on the standard fares for flights by KLM and by its partner Air France. Both companies form part of Europe’s biggest airline group, serving 314 destinations and 116 countries worldwide. The discounts will be applied without stop-over or route limitations where KLM or Air France flights end and/or begin in Valencia and are taken in connection with the Marathon and the Half-Marathon.

Discounts for the Half-Marathon

In the case of the Valencia Half-Marathon,, the discounts will be applied between the 23rd of October and the 2nd of November (both inclusive), using this link to the KLM and Air France web portal:

Discounts for the Marathon

Discounts for the Valencia-Trinidad Alfonso EDP Marathon will apply between the 27th of November and the 8th of December on this web site.

In addition, KLM will also have a stand at The Runners’ Fair, which accompanies the Valencia Marathon. The last edition of the Fair attracted almost 65,000 visitors. The company will also be present at two support points along the Marathon route (of which there were over 200 in 2017) and at another point in the city centre.

Members for Air France’s and KLM’s frequent-flyer programme — Flying Blue — can also Exchange air miles for a free running bib in all the marathons sponsored by these airlines, including the trials in Valencia ‘The Running City’.

KLM Royal Dutch Airlines was founded in 1919. It is one of the world’s oldest airlines still operating under its original name. In 2004, Air France and KLM merged to form the Air France-KLM group. The merger gave rise to Europe’s biggest European airline, based on two powerful brands and hubs: Paris-Charles de Gaulle and Amsterdam-Schiphol, offering 314 destinations in 116 countries. The merged companies maintain their separate identities within the Group, which focuses on three main lines of business: passenger transport, freight, and aircraft maintenance. KLM is a partner in SkyTeam, an Alliance of 20 airlines, which gives access to a worldwide network of over 17,000 flights a day to over 1,060 destinations in 177 countries. Flying Blue, the Group’s Frequent Flyer programme, has over 15 million members. In The Iberian Peninsula, the Air France-KLM Group offers over 2,000 flights a week during this Summer Season from and to 23 Spanish and Portuguese airports through its ‘low cost’ subsidiary Transavia and its partners, Delta Air Lines and Air Europa.[/vcr_note]