La Caixa” remains committed to the most representative long-distance athletics projects on a national and international level of the city of Valencia. The financial entity has renewed the sponsorship agreement as the official bank for the Trinidad Alfonso Valencia Marathon, and in turn, for the 2014 edition, it has also joined the group of sponsors that will be present in another of the most important races of the city: the Trinidad Alfonso Valencia Half Marathon. 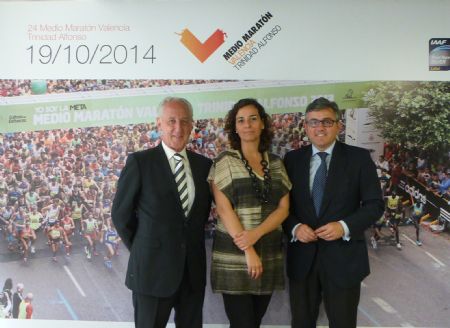 The agreements with both events are effective for the 2014 edition and have been signed in the Concejalía de Deportes of the City Council of Valencia by Beatriz Alventosa, Delegate of “la Caixa” in Levante and Murcia, Francisco Borao, President of SD Correcaminos, and Cristobal Grau, Sports Councillor of the City of Valencia.

Thus “La Caixa” supports the two most well-known events on the national athletics scene which are one of the best business cards of Valencia abroad. A proof of this is the international growth of the Trinidad Alfonso Valencia Marathon, which has a participation of foreign runners around 24% and last year was the fastest marathon race on national soil, with a time of 2:07:14. Meanwhile, Trinidad Alfonso Valencia Half Marathon is placed since 2011 among the 10 fastest half marathon races worldwide and is struggling to become the fastest half marathon in Spain.