Its races, at any distance, are among the best in the world and it has seen nine world records being set, seven on the road and two on the track. And we think there is more to come, because Valencia is, without a doubt, the land of records. Of World Records. 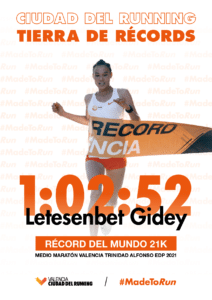 Women only Half Marathon WR