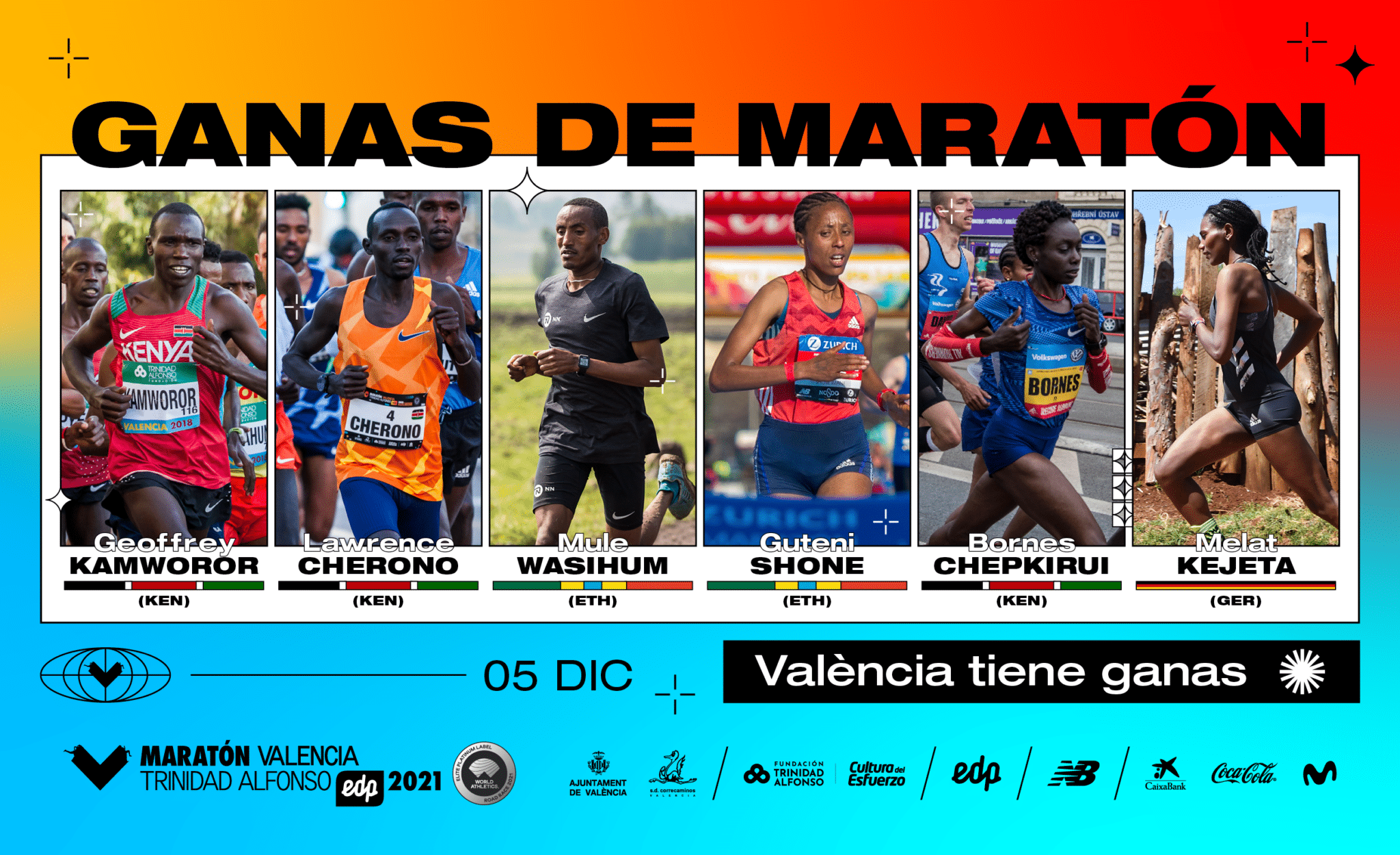 Valencia will once again become the epicentre of the running world when it holds the 41st Valencia Marathon Trinidad Alfonso EDP, a race that in 2021 wants to continue making history by beating the course record (2h03, fourth fastest in the world) and getting closer to the longed-for world record in the men’s category and by becoming the best women’s race of the year.

And to achieve this it will count on some of the best athletes in the world including the Kenyans Geoffrey Kamworor, Lawrence Cherono and Amos Kipruto, and the Ethiopians Mule Wasihun, Getaneh Molla, Kinde Atanaw and Andamlak Belihu.

Kamworor (2:06:12), who broke the half marathon world record in 2019 (later broken in 2020 in Valencia) and who has won the New York Marathon twice, is seen by many as the successor to Eliud Kipchoge and he is eager to show what he can do. Since he had to withdraw from the Tokyo Games due to injury, he has been preparing exclusively and conscientiously to achieve a great result in the City of Running on 5 December.

Although her personal best is not the most impressive, another favourite to win will be Germany’s Melat Kejeta (2:23:57), who finished sixth at the Tokyo Olympics and clocked 1:05:18 in the half marathon in 2020 (European record at the distance). Also watch out for Nancy Jelagat, with a personal best of 2:36:22, but a time of 1:05:21 at the Berlin Half Marathon in August, which bodes well for quick times. Finally, we would highlight the debut of the young Kenyan Dorcas Tuitoek, who has run 1:06:33 in the half-marathon, and who showed herself to be an outstanding athlete at the 2020 Elite Edition in Valencia.

For Marc Roig, the coach of the International Elite for the Valencia Marathon, “this year’s marathon is extremely competitive, as we like it in Valencia. I don’t rule out a sprint finish in both the men’s and women’s categories and, in fact, I’m counting on it. The athletes know that Valencia offers one of the best circuits for achieving personal best times. And this, with the level of runners we have, can easily translate into several athletes breaking the course record. By how much? We will see on 5 December”.